Dąbrowa Górnicza is an example of a typical 19th-century industrial town consisting of a place to work (factory) and a place to sleep (house or flat).  Despite several attempts made in the past (1950s), the city has not yet developed a central public space which is more than a road from home to work and back. 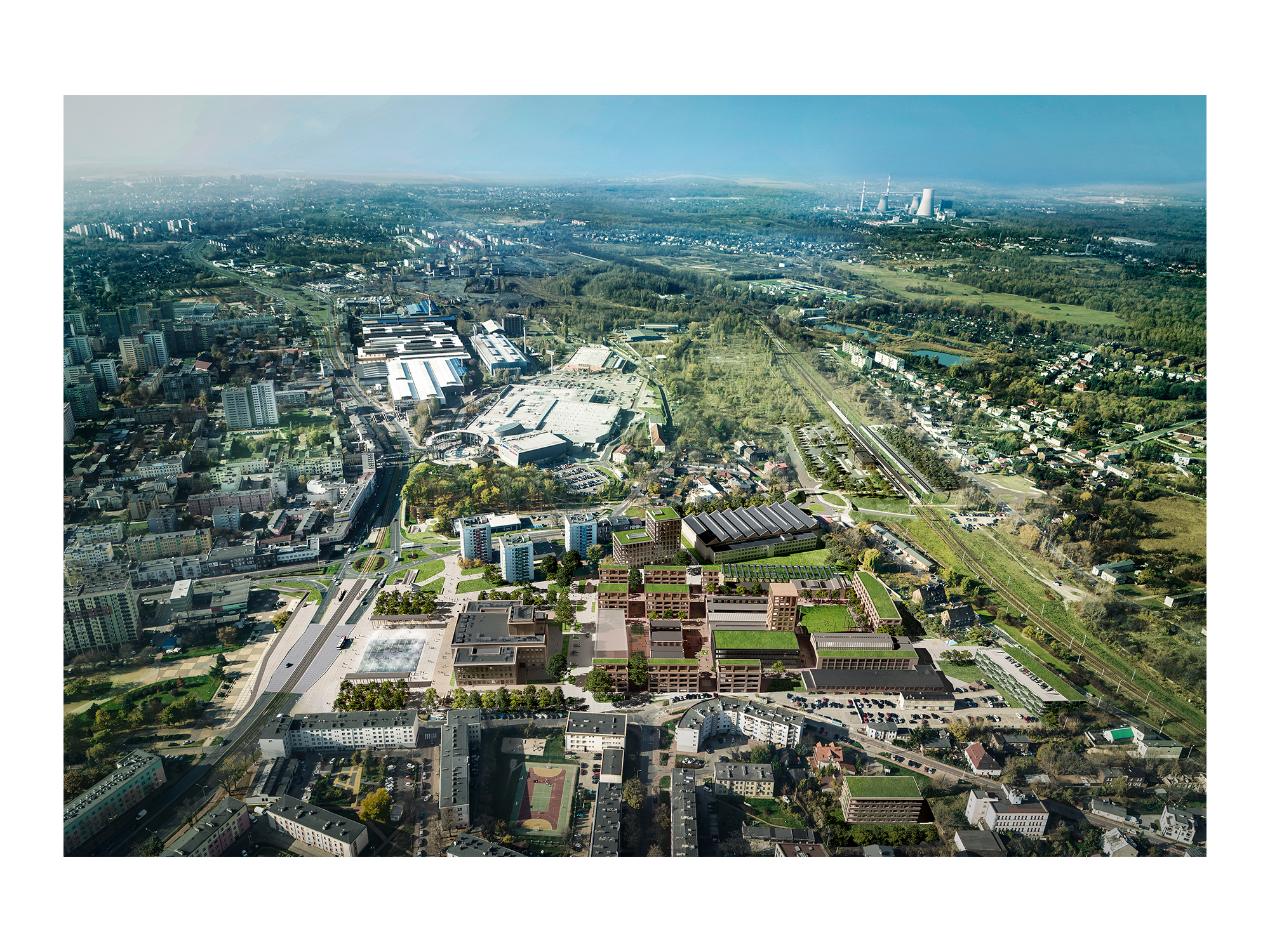 The favourable economic situation caused the city to make another attempt to create central, urban public space.  The opportunity appeared when the city bought the DEFUM machine tools factory, which had stayed idle for a few years, in the very centre of the city.  These former factory buildings, located just behind the Zagłębie Culture Palace, will be the ground for the city centre that Dąbrowa Górnicza has never had.  It was unusual and unique in Poland that the design stage was preceded by a broad public consultation which lasted many months and, during which, the residents could not only discuss the future character of the centre but also take part in prototyping the future public space. 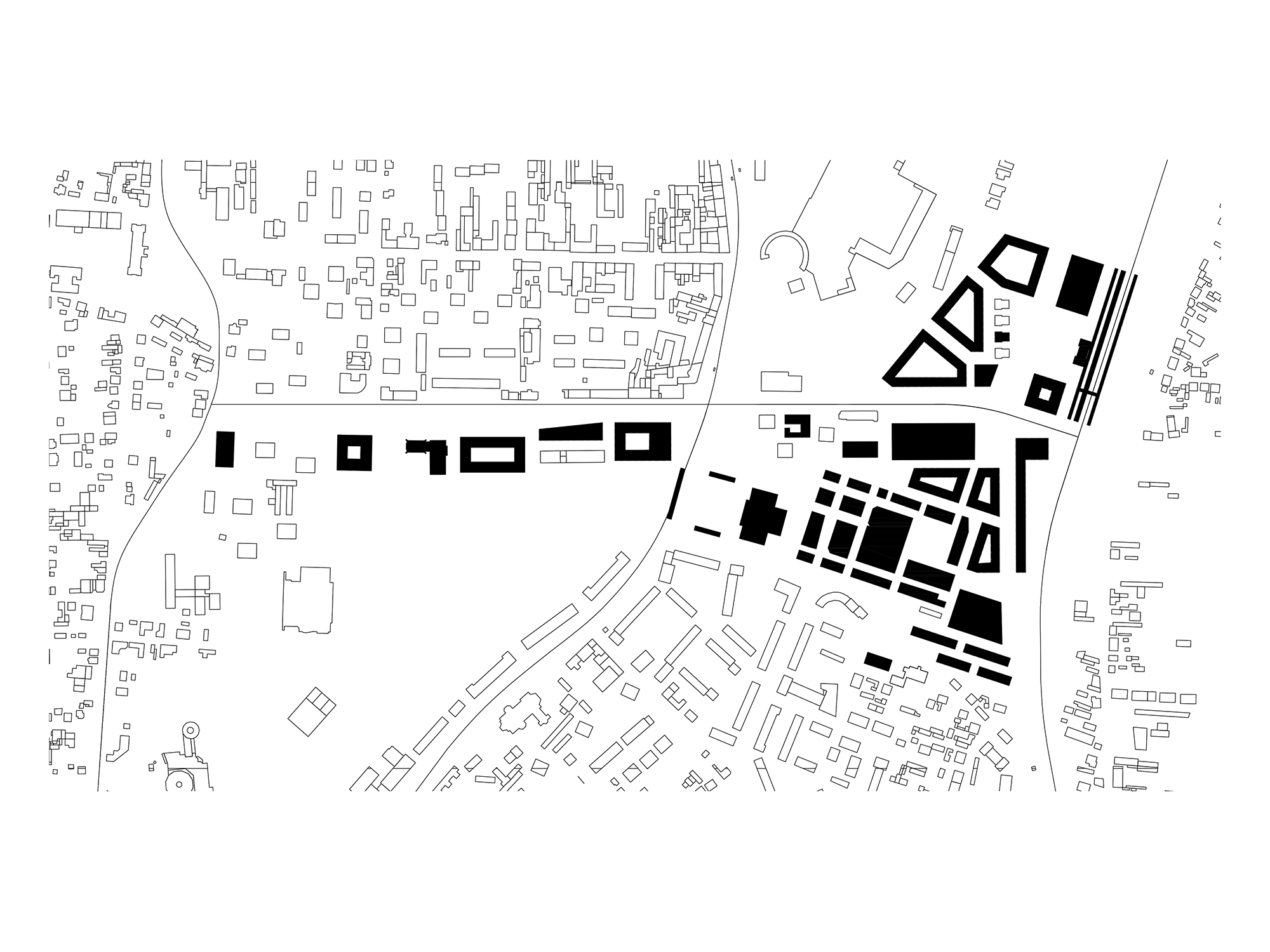 The centre of Dąbrowa Górnicza is characterised by a variety of architectural forms built in different periods (socialist realism, the modernism of the ’60s and ’70s), which the project organises and emphasises its uniqueness to finally follow it up. The concept tries to sew together and combine the parts of the city created at the intersection of former steelworkers’ and miners’ residential districts and the two most important industrial plants by CONTINUING URBANISTIC CHANGES initiated in the 1950s. The identity of a place is created not only by objects which were built but also by those which have never been realised i.e. living in collective memory existing only in the form of photographs, mock-ups, etc. The project deliberately reaches for this first vision of the city centre, which exists only on paper, as it enters into dialogue with it and picks up its most valuable aspects. 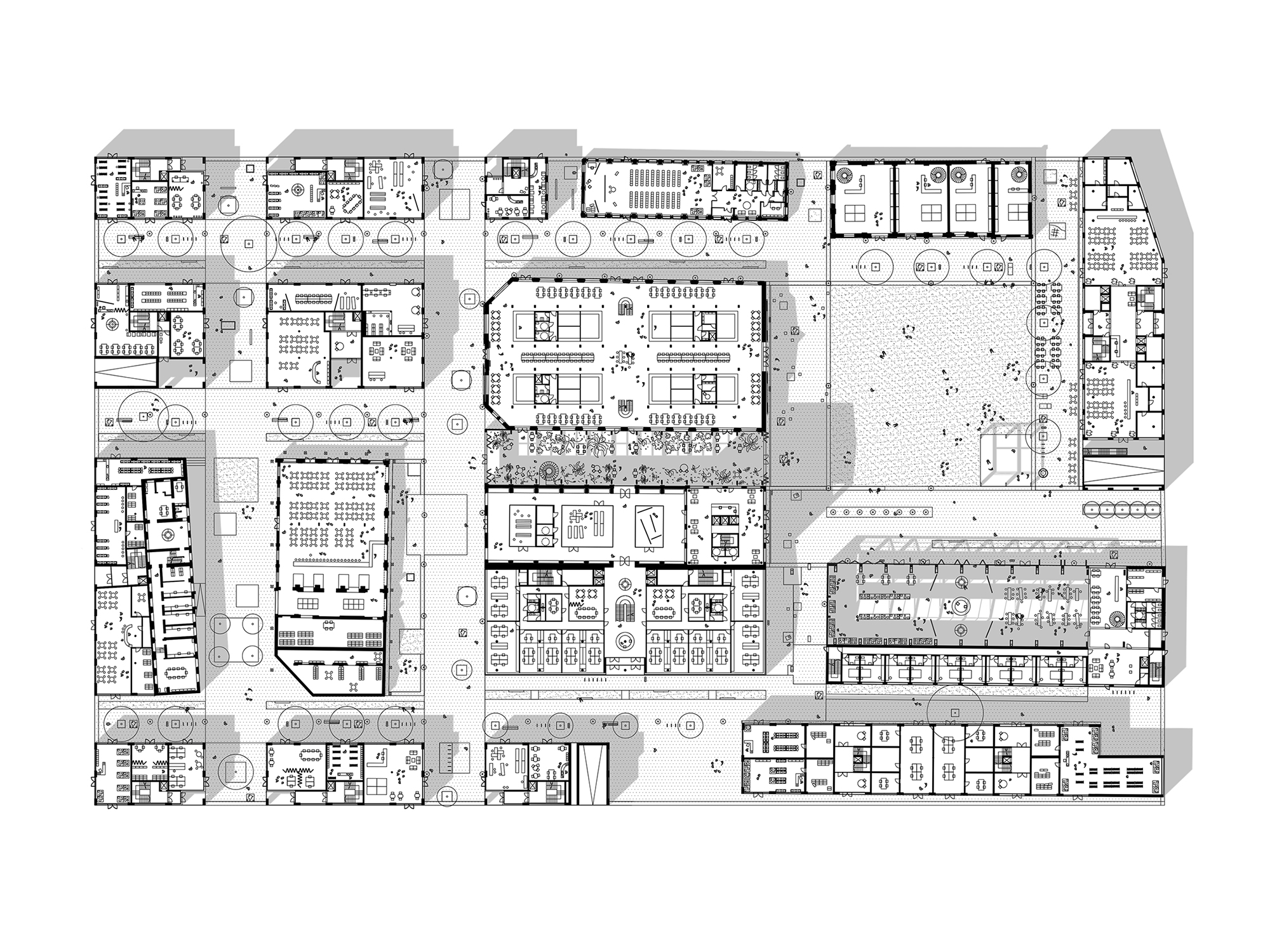 The concept the ANALOGUE city centre project is based on connecting the places important for the residents and cutting out a public square at the crossroads of these paths. The RYNEK FABRYCZNY (FACTORY MARKET) (space cut out of the facility) is created among post-industrial buildings; distinct in its character, complementing the larger and more representative Plac Wolności (an object located in the space).  The main assumption of the factory area is the DIVERSITY OF DEVELOPMENT (diverse types of architecture), which involves intensive use at any time of day or year.  A hall, basilica, courtyard as well as linear low and high buildings – old and new (formal variety of architecture) – undergo metamorphosis and transform based on the timeless logic of this place; they create a composition understandable from the pedestrian’s level, which is only a background or space for vibrant life taking place here. 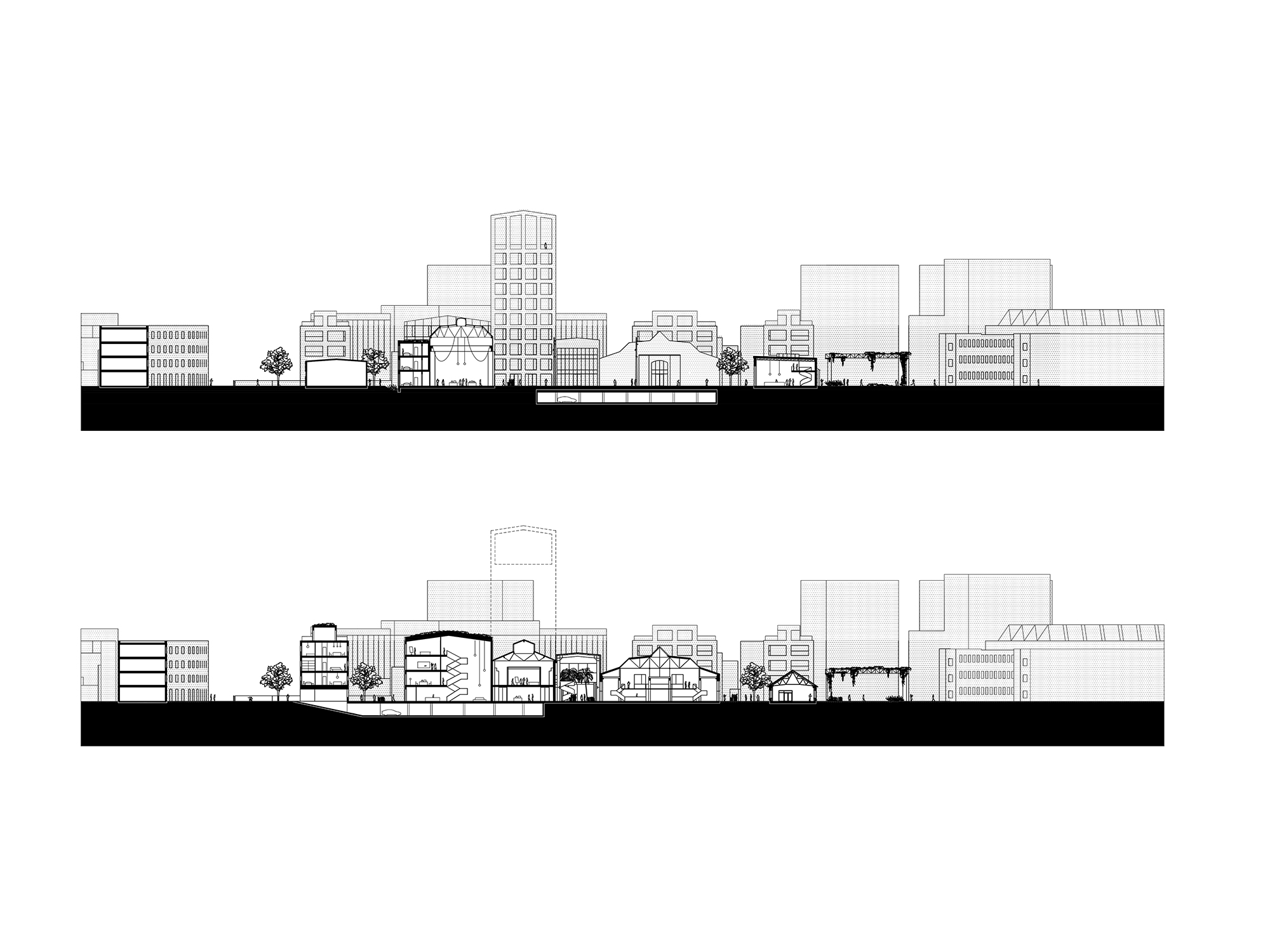 The buildings of the former factory have been treated as liberated spatial potential for urban activity which will develop here naturally thanks to close contact with a wide range of users. A street revealing a cross-section of halls was introduced to increase the accessibility of the space and the possibility of intersecting as many of the residents’ routes as possible. Dividing the heavy architecture into several independent forms makes it easier to access the area and makes the perimeter of each newly created building or quarter ready to absorb new functions. As a result, the once inaccessible centre of the factory was fully opened and connected to existing streets with their characteristic facades. 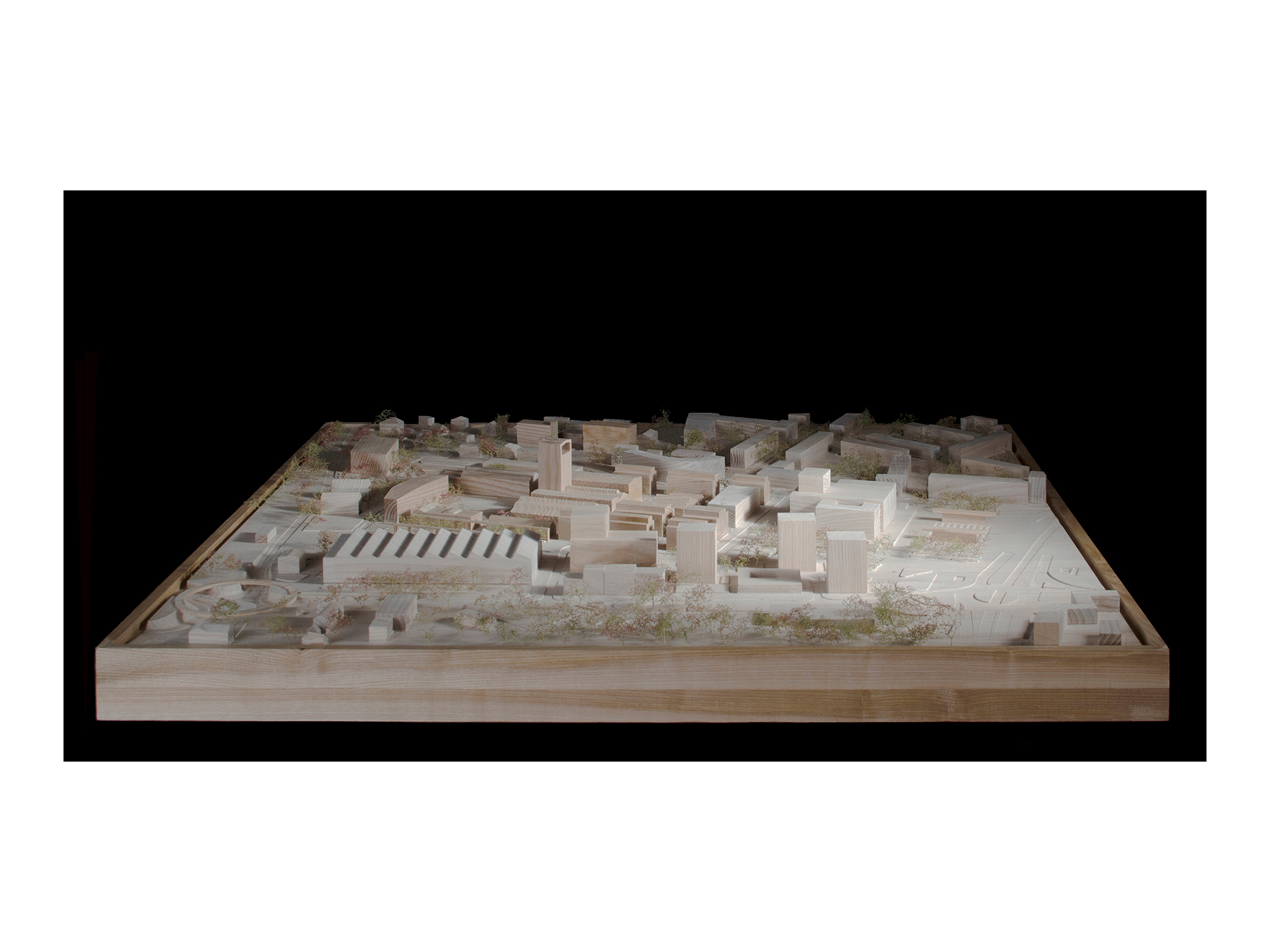 After verifying the technical condition and architectural values of the existing buildings, it was decided to remove some of them in order to create a square inside the former DEFUM factory, not next to it. The existing halls were developed in diverse ways, complementing them with new facilities of commercial functions such as services and retail trade on the ground floor and apartments and office space on the upper floors.  The identifying element of the new centre of Dąbrowa Górnicza is a tower building located at the factory market with a scenic view.  The counterpoint for the tower building is the “lying” office building which occupies the whole opposite frontage of the market.  Both new buildings in the heart of the factory have been evenly matched through façade perforation and brick coloured architectural concrete.  The entire complex forms a clear, cohesive whole that distinguishes itself from the surrounding buildings, which emphasises its individuality. 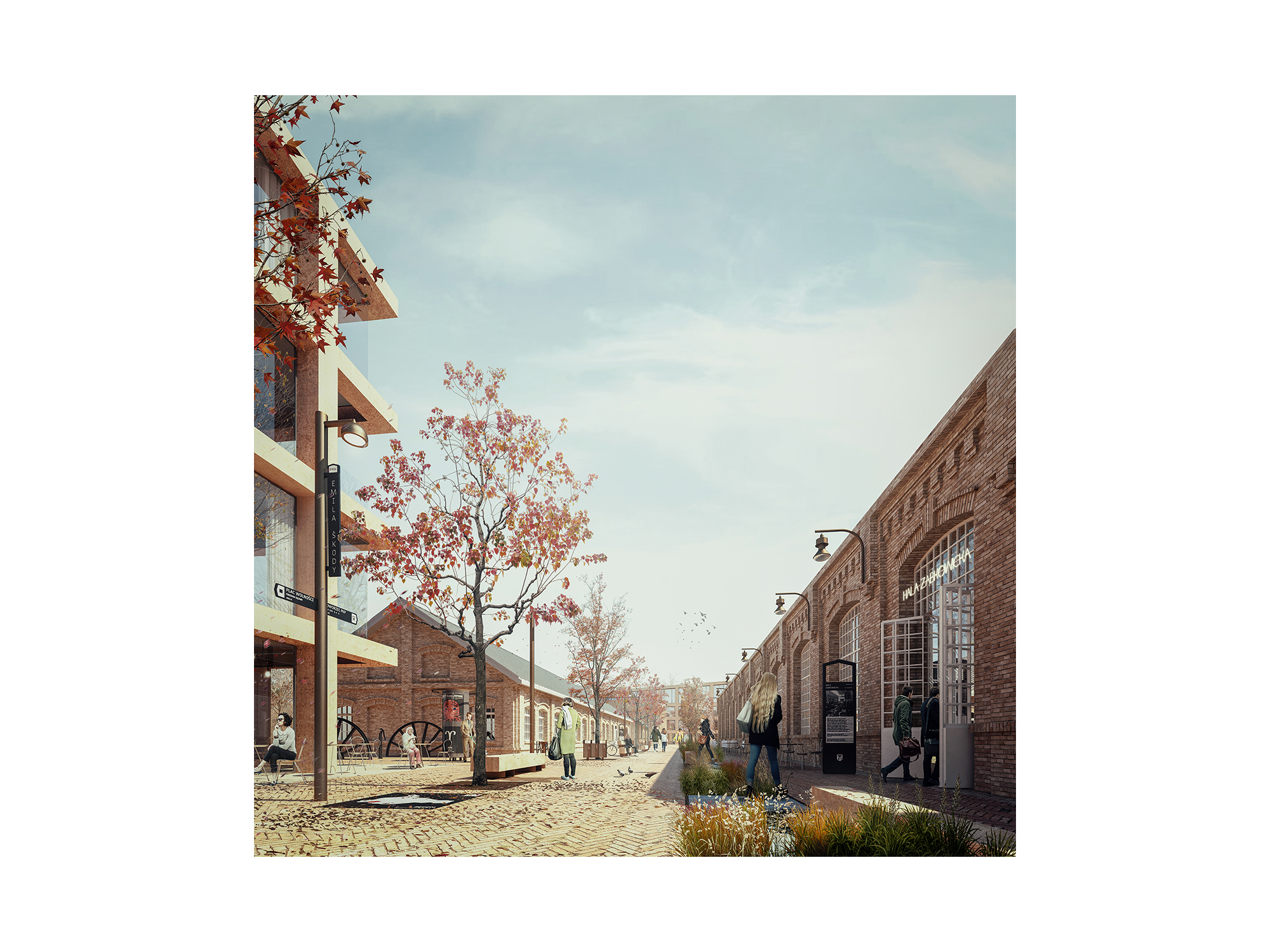 New facilities were built from material originating from the demolition of existing facilities.  The character of the new buildings within the FPŻ area refers – with its form (long, elongated forms of industrial halls) and materials (brick, sheet metal, profile glass etc.) – to the existing buildings. The open space of the interiors of the former industrial halls was the main design priority for the adaptation to the new function.

The concept of FPŻ assumes the neutrality of functional solutions allowing the residents to independently decide how to use the space by leaving the space functionally undefined.