The lay of the Erasmus zone at the limits of The Hague and the outside area of Randstad requires comprehensive analysis for urban development. Starting from the tendency of cities to growth within the ring between Utrecht and Rotterdam to a compacted zone between the ocean and the area more influenced by the landscape, buffer zones of decreasing density are created at the respective city limits, similar to the intervertebral discs of the spine, which enable a connection between the two elements ocean and landscape. These evolutionary and very sensitive connecting elements are to be supported. By an exact analysis of the position of these “green lungs”, it is possible to establish a connection to infrastructure. If you simulaneously consider the anticipated growth tendencies by for instance comparing with the development of American sprawls, then you reach the result that traffic networks and especially their intersections encourage settlements. 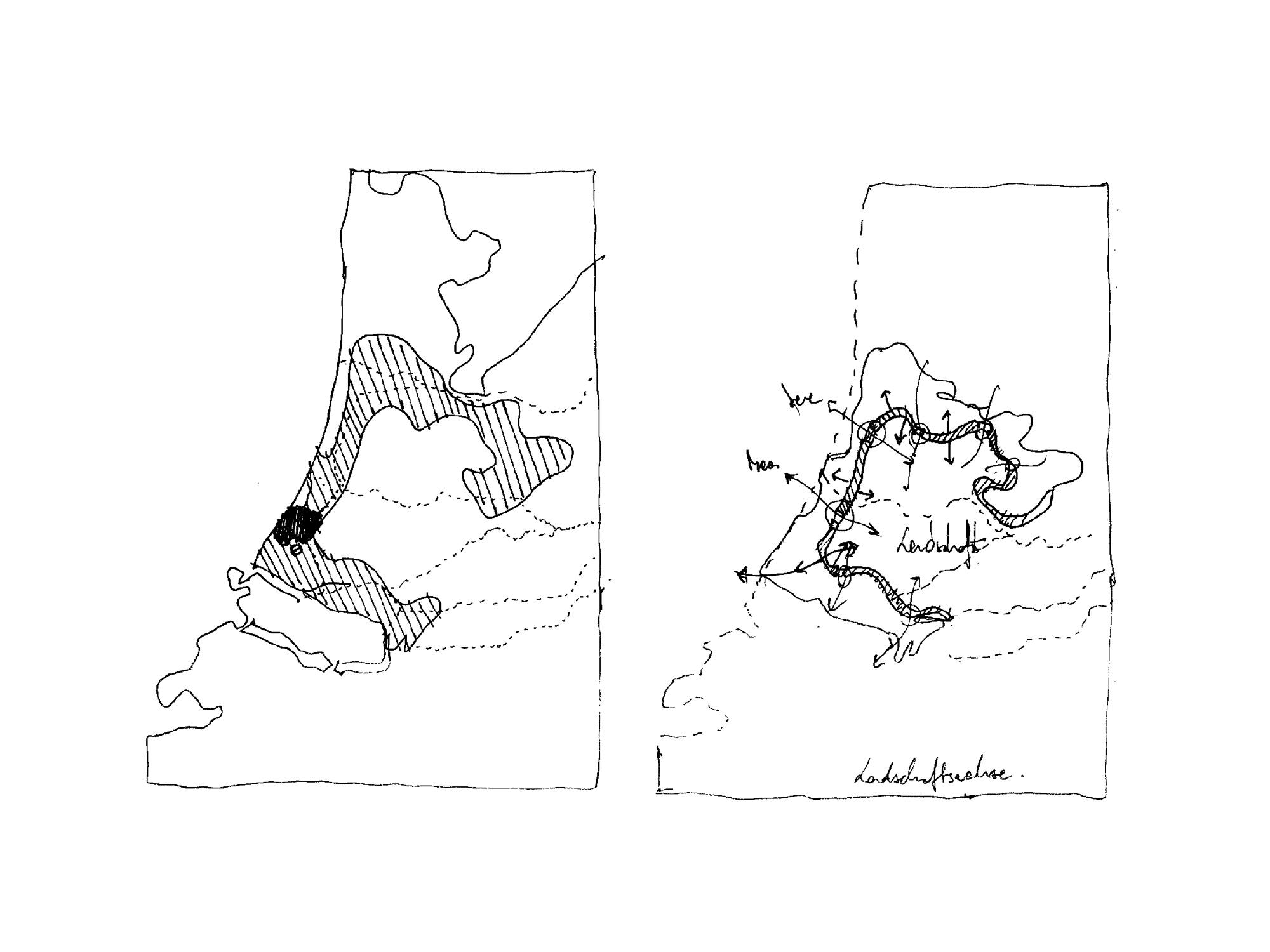 Such connecting zones and simultaneously centres of impulse can be found in The Hague as well. The most interesting, becouse just being formed, crosses the Erasmus zone by connecting the exit of the autobahn with broader corridor of the Dedemsvaartweg leading to the sea. In parallel to this stripe planned as empty space respectively “zone vide” is the building. This stripe is planned as being evolutionary: The building or facilities, which already exist there, may be preserved in traces. Due to the fact that some functions can be found within our hybrid building, they are in course of time reclaimed by nature in the sense of the vacant lot. A guiding idea for this is the city as a “Kasco”. Becouse a dichotomy between city and landscape is no longer limited to individual points in this region, but is effected by and by, we called it a “Linear Centre”, to simultaneously express the growing importance due to growing mobility of this peripheral zone, seen from the old center. Also, by this orientation, our urban development aspect is to be stressed again, as the second term supports our recomendation for density at this transition to landscape, becouse the latter does not form an unlimited resource. 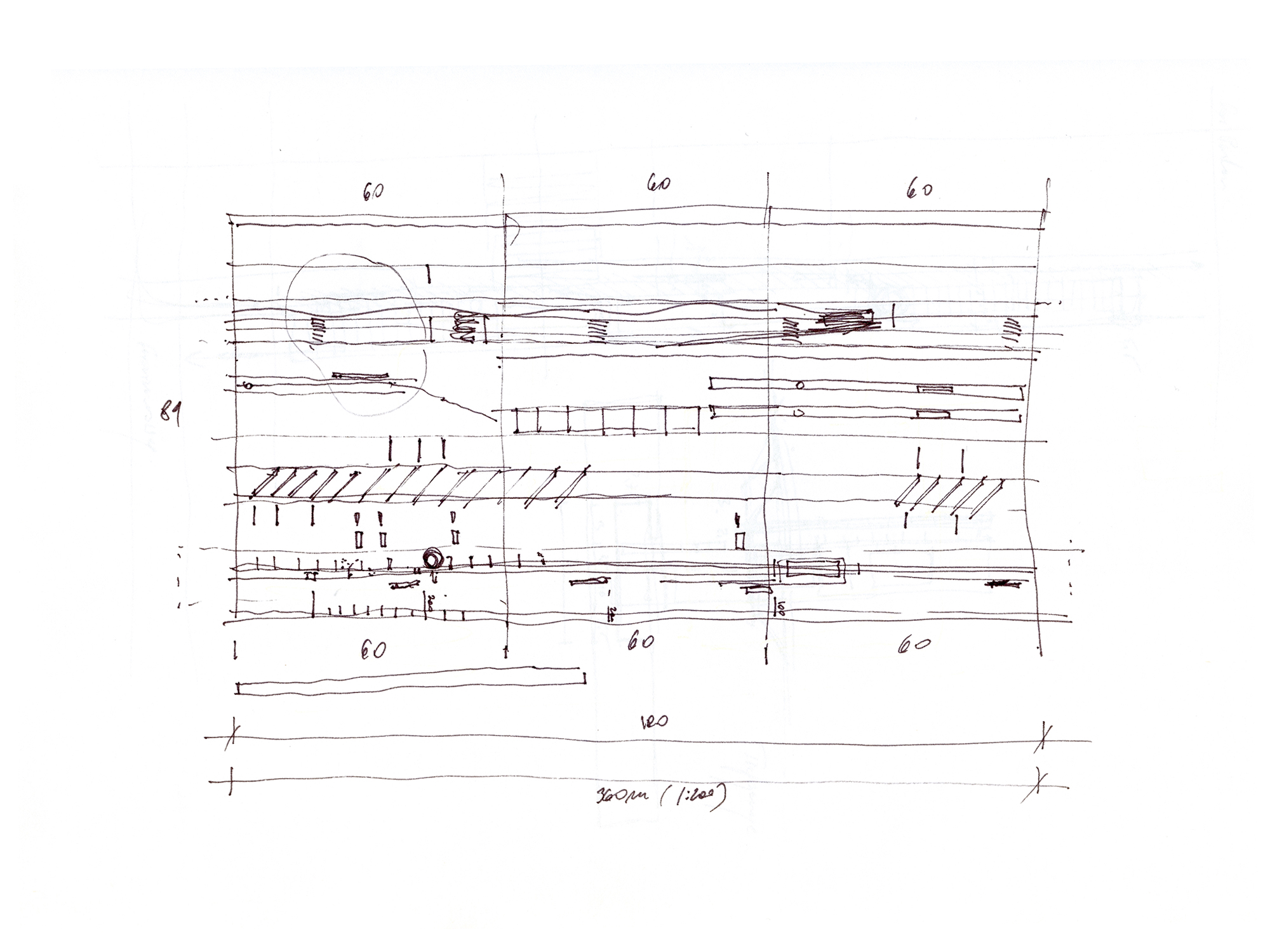 At the building itself this transition from a more urban, compact area to a wide landscape can be seen. This process is accompanied by landscape platform, which extends as a topic through the whole building. Thus, the guiding idea of a “Kasko” and even more the appendix 5’04” evokes a comparision with music, which is determinated by time, as well as the Linear Centre is determinated by the fourth dimention.

Sites are fixed not only according to the temporal distance in our mobile society. Starting from the apartment as a fixed point the “dromocracy”, respectively every “dromomane” (Virilio), can put his town together after his own conceptions and requirements, mostly using his car. Therefore the building is five minutes long – distance, which is still accepted by a pedestrian. If you take the average speed of a pedestrian, which is five kilometres per hour, a building which is 420 meters long can be passed during 5 minutes. The four seconds are to be read ametrical and symbolize the transition, the metamorphosis or disintegration to landscape. During this segment of time, there are  various possibilities of shopping and attractivities to spend the leisure time (cinema, coffee-house, sport, mediatheque, and other services) whereas the circulation in the hybrid building should be inviting as a public place to communicate. Further network is permanently available by means of electronic communication, teleaction and so on as a virtual movement. 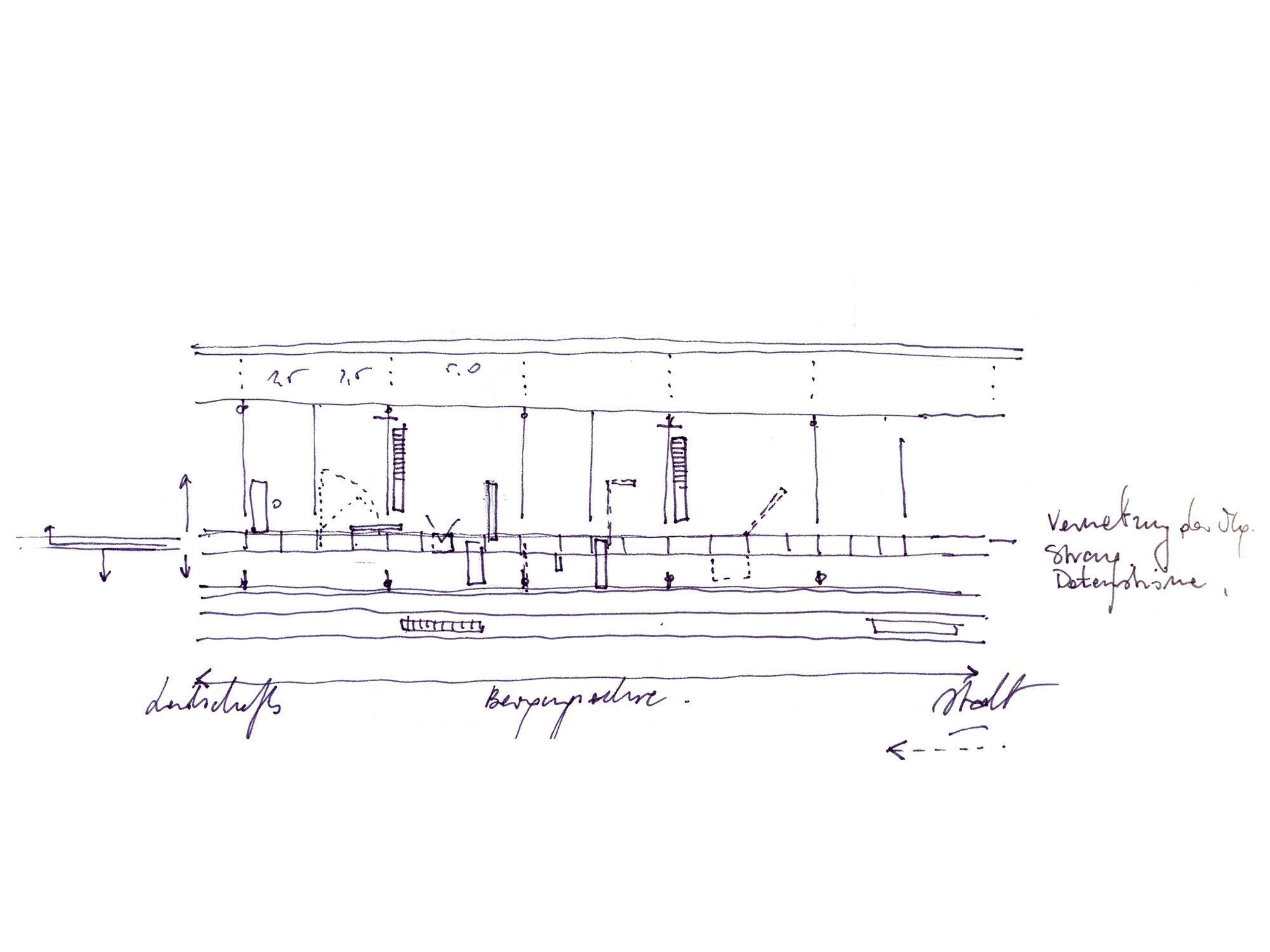 All kind of technical supply for the apartments is concentrated in the technical stripe, which is located at the north side of the building. This zone also provides the virtual connections for each flat: every room has technical equipment which allows to participate in the telecomunication network, or simply to plug in. Furthermore this transparent zone of supply reflects the living’s customs and activities of the inhabitants. This concentration of technical equipment provides a maximum of flexibility for the disposition of thr floor-plan. Each person or family can create his own, individual space of living according to their personal habitudes.

Both making visible the different functions and activities, which take place behind them, the north and south elevation differ widely in their character and appearence. The south facade is situated in front of the individual rooms and is totaly glazed, revealing the daily activities of the inhabitants and changing of seasons. The northern side of the building is a zone of communication and movement. It consists of stairways, elevators, galleries and airspacewith bridges leading to the individual entrances.

This zone of circulation is accompanied by an time axis, which is also visible on the facade, thus presenting the different velocities of the dromomane. Consequently the small segment of time, the composition of five minutes, is integrated into the rhythm of seasons.